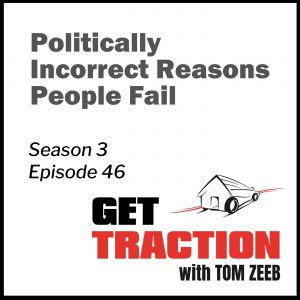 I've coached many students over the years, and I've talked to many people through all the Traction REIA training events and MasterClasses that I teach across the country.

And since people really are generally the same, it didn't take long to start seeing the patterns.

So needless to say, I have a very good idea of what types of people are generally out there.

Which types can, and will, follow my advice, achieve success, and get the job done.

And those who can't or won't.

The “implementers” will take a great idea I give to them, and just run with it.

They ask questions about **HOW** to implement it, not **IF** they should.

They don't argue with me, or think they need to find their own way of doing it, they simply implement what they've been told. They don't reinvent the wheel, they take my smooth round one and roll with it.

The “excuse-makers”, on the other hand, always feel the need to argue and customize.

They think they need to do it their way or that it has to have their personal stamp on it. They fail to see the value in quickly implementing what I tell them has actually worked. Instead they need to “find out” for themselves.

The problem is that often they just make the same mistakes all over again, and then they fizzle out by the time they would have found success if they had just implemented my instructions.

If only they would have listened from the get-go. Then they could have avoided all the heart-ache.

And so they stay stuck.

(If only they would be as stubborn towards doing what it takes to achieve success, rather than having to reinvent every wheel they come across…)

When you work with me, I always focus on “what's your next step”. Because that's all you need to be focusing on right now.

If you are afraid of some step in the future, that's fine.

Because I'll be there for you too when that step actually comes.

But if you don't focus on the very next step ahead of you now, then you'll never have a chance to actually face that future fear and take that future step.

But many people live focus-free and confused intentionally (at least subconsciously), because then they can't blame themselves for their failures.

** Their current financial situation.
(But how do you expect to have any money if you never make the moves needed to earn more? A little sacrifice now will go a long way to making your life better.)

** Their lack of time.
(Newsflash — no one has the time — but the successful make it happen anyway. They carve out what time they can (we all waste more than we think) and then leverage their time for maximum results.)

** The “economy”.
(Oh yes, this is the favorite excuse of most failed large companies and all the media hype, so it's easy for you to continue ignoring the truth and just jump on that bandwagon and protect your fragile ego as well.)

** Their parents or upbringing.
(Yup, you were damaged growing up, and that's unfortunate. But it's time to break free of those old chains. The secret is that you just have to actually want to, and then make the moves needed, to move on. (Or perhaps that's what really scares you?))

** Their spouse for holding them back.
(Perhaps if you weren't so co-dependent, then you'd just sac up and take charge (which is really what your spouse wants to see in you). You'll all be better off in the long-run.)

** Their general lack of belief.
(Guess you just like to dream. Never mind that your dreams will never come true if you don't take action on them.)

If you are REALLY serious about achieving the goals you want, then you'll come up with the money one way or another.

And you'll find the time to make it happen.

And you'll ignore all the other negative things holding you back.

And the teacher has appeared.

Go to one my upcoming Rapid Cash Generator training events.

Just make the first move by Going to GetTractionPodcast.com and clicking on “events”