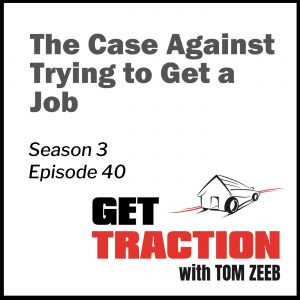 Trying to get a job…

… vs starting a business.

I was thinking about this as I've recently spoken to some old friends.

They were all trying to get a new job, or a higher position, or move to a better company.

They want a better lifestyle, more freedom, and higher salaries.

They want personal advancement, but…

…the only thing they know is how to work for someone else.

So someone else provides them the job.

And they are at their mercy.

They have to take what they get.

So many people will spend so much time trying to advance their career by working for somebody else.

But they won't spend the time on building their own business.

Largely out of fear.

It just doesn't seem like as much of a sure-thing when you have no experience in it.

So it's a largely a matter of not knowing the outcome in advance that is holding them back.

At least for the short term.

But there aren't really any long-term guarantees.

Even if the economy has been massively improving lately.

Therefore, if you take the time to build a business right, you can be free sooner than you'd think.

You just need to focus during that time.

And put in some effort and hard work.

If you now spend that time doing what others won't, you'll later be able to do what others can't.

And that's when the fun starts.

Hey, just another reason to venture out on your own.

(In my BIASED, but accurate, opinion.)

I won't say it's for everyone.

But if you want “in”, attend one of my upcoming Rapid Cash Generator training events.