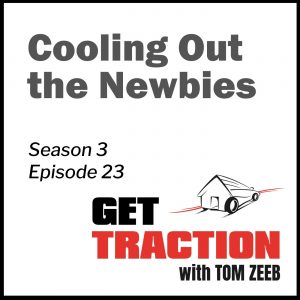 And the most important question is asked…

JUSTIN G:
“Help! I've just gotten into real estate investing and it seems the entire training industry is swimming with sharks just looking to take my money. It's like living in a bad late-night infomercial. Is it really possible to succeed or is the whole thing a scam run by smooth talking con-men?”

TOM:
Confidence men (aka “con-men”) know that their victim, “the mark” as he is called, is eventually going to realize that he has been cheated.

If the mark realizes it immediately, then he can fight for a refund or raise a ruckus with the credit card company or a consumer protection agency.

But if he realizes it much later after the con-man is long gone, there are less options.

Pride also stands in the way, as many people simply won't admit to being had. Instead they just sweep it under the carpet rather than tell another soul that they lost money on a scam.

They rationalize “Everybody has to lose sometime, right? It could be worse.”

Therefore, part of the confidence racket is creating a period of uncertainty, during which the victim is not yet sure of what is happening.

This delaying process is called “cooling out the mark”.

Or in the real estate training business, “cooling out the newbie”.

Many real estate training programs bank on this.

Especially if they just roll into town on a massive sell-a-thon.

Best to be on guard and watch your wallet.

Are they ALL bad?

But like anything else, you have to learn how to distinguish the good from the bad.

Ask yourself these questions:

* What is the reputation of the program?

* Who are the key people involved?

* Are they famous or well-known names? And if so, do they actually have anything to do with the program or are they just a famous face to help sell it?

* Will the level of service provided be as aggressive as the hard sell sales pitch you've gotten?

* Who will you actually be dealing with once in the program? Someone actually experienced? Or just a stooge reading from a script at a call center?

Don't be afraid to take a step back and give yourself some time to consider what you are about to invest in.

Once the pressure is off, you'll be able to make a more rational decision.

(Which is why they push you to make a decision NOW, because you won't like the idea as much if given time to reflect and consider.)

And what about me?

Do I cool out my newbie buyers?

Actually, I do the opposite.

Since I won't take just anyone in my real estate coaching program (which is a business/lifestyle choice for me), I look to build a relationship with you first.

But not until we've both had a chance to consider, without pressure, what we are doing.

I'm quite sure I make less “sales” because of my approach.

And better for me.

If you are warming to the idea of working with me as your mentor, start the process of getting to know me more by attending one of my training events.