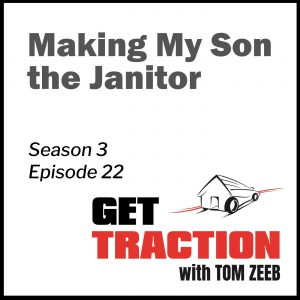 I was playing Rich Dad's “Cashflow” board game again with my older son this past weekend.

We decided to choose our professions knowingly, instead of randomly, from the pile of profession cards.

“Daddy, I'm choosing to be a lawyer because I'll make lots of money.”

Then I choose the janitor.

“Why'd you do that daddy? The janitor doesn't make any money. He's poor.”

After a few times around the loop, it only took 2 deals to get me out of the rat race.

My son was surprised.

Then I explained my choice.

Because of his higher lawyer salary and bigger debt, it would have taken him 7 of the same deals to get him out of the rat race, and many more times around the loop (each loop being roughly equivalent to 3 months' time).

So which is better?

The lawyer or the janitor?

Both CAN do it.

But it's actually easier for the “poorer” one to escape from the rat race.

Which one do you want to be?

In my real life I used to be somewhere in between the janitor and the lawyer.

I had far too much debt and barely average income.

To be exact, I had barely more than a janitors salary, but all the debt of the lawyer.

But I dug myself out.

Same as in the Cashflow board game:
I flipped houses wholesale to get me into the bigger deals and out of the need for a J-O-B.

The process wasn't super smooth for me.

Because I didn’t have a great system to follow.

But I can make it smoother for you now.

Because I've put it all together into a system that I teach at my live events.

Go and implement it, and you can have rapid success too.

Find out more:
Go to GetTractionPodcast.com and click on “events”