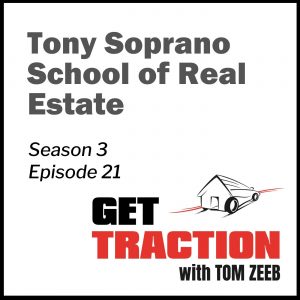 Even Tony Soprano found out that old blighted neighborhoods can change.

Remember that episode of the Sopranos when Tony sells a building to some developers looking to put in a “Jamba Juice” store?

It's a classic example of an old neighborhood that starts to undergo a renaissance.

Pretty soon nothing is recognizable as everything gets remodeled and all the national chains move in.

Tony doesn't even know what a Jamba Juice is, much less anything else that starts to arrive in the neighborhood.

Two of his goons then go and try to shake down the neighborhood's new Starbucks-like coffee shop to offer “protection”, but the manager just gives them the run-around stating that he is required by ‘corporate' to account for every dollar spent.

They lament that “It's over for the little guy…”

But it isn't just the big corporations that turn things around.

It actually starts much smaller than that.

And it isn't just one person or company. It takes a bunch of individual players — people like you and me — the independent real estate investors, who are willing to go in to a rough neighborhood and start to turn it around one house at a time.

When the individual homes in a neighborhood start to get rehabbed and updated, things start to improve.

As the blight goes away, then the rest of the corporate money and other investors steam in.

I've lived in such a neighborhood.

And it's been amusing to see the changes and what has happened.

I did 7 deals in this old neighborhood. Including the house I lived in for awhile. All of which contribute to the turnaround.

Things have indeed changed and now the neighborhood is hip-and-happening.

There are new restaurants, bars and shops everywhere.

Whole Foods, Trader Joes, and a bunch of other trendy chains now moved in.

Now everyone wishes they would have gotten in there years ago.

That's easy to say now after many years have passed and one can see the actual results without just speculating.

But to get in at the right time takes vision.

And vision is what people are lacking.

They worry about losing money or just making a bad choice.

And those worries keep them stuck.

But if you had someone to guide you, protect you, and advise you along the way, you'd feel different.

Not a gangster like Tony Soprano, but a coach and mentor to give you instructions, push you ahead, and keep you on track.

That's what I do with my Rapid Cash Generator Kit & Implementation Bootcamp.

Think of it like a personal protection racket. (But in a good way, of course)

Come find out about joining my “family”…