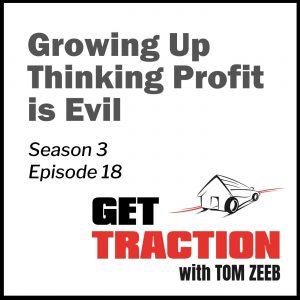 Let me tell you a story.

I was talking with a bartender from Bucharest, Romania.

I travelled there back in 1996, a few years after they initially broke free and toppled their authoritarian socialist government.

We got to talking about his country and the many changes that have happened since the fall of communism and the beginning of their capitalist market economy.

He told me, “I could have been rich, but my parents were afraid to profit.”

I asked him what he meant.

He said that after the fall of communism his parents opened a small convenience store.

They sold the regular items you and I would expect.

Not a big deal for us, but these things were actually restricted under communism and the common people never had them (yet somehow the Communist Party leaders did have them — so much for everyone being equal…)

People now wanted these items and business was good at first.

But his parents quit the store after one year because they didn't feel right about buying a pack of gum for 50 cents and selling it for $1.

They had been raised and conditioned to think that profiting is evil.

Even though people were happy to pay $1, they were scared they were doing something wrong because they didn't sell it at cost.

So they ditched the store and then got jobs working for someone else. It was what they were used to.

But he told me he could have been rich, because the fella they sold the store to took it and ran with it and now owns 12 full-size grocery stores and a number of other businesses that he got into as a result of using his parents' store as a springboard.

But it speaks to a deep-seated truth…

Namely that people will tend to do what they know best and what they are comfortable with at the moment, even if it isn't the best for them in the end.

I deal with this mental attitude constantly as a real estate business coach.

People struggle to have a forward-looking mentality — especially if they don't have a role model to show them the path and show them that the end result is indeed okay and acceptable.

How to break free from this trap?

1. Learn how to build a thriving business.

2. Learn what capitalism is really all about.

3. Learn how to focus on and earn profits so you can then fulfill your dreams and goals whatever they may be (they differ for everyone).

So rather than closing your store and missing out on freedom and profits, get properly educated by attending one of my upcoming training events.